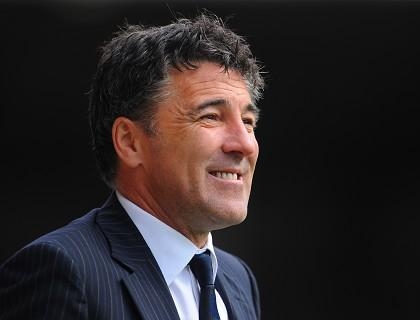 Taylor-Fletcher at the double in win

Taylor-Fletcher helped himself to his sixth and seventh goals of the season in the first half to put Ian Holloway's side on course to stretch their unbeaten run to 10 games in all competitions.

Relegation-threatened Rovers looked rusty after a fortnight without a game, but they were given hope when El-Hadji Diouf pulled a goal back from the penalty spot before half-time.

Blackpool were not at their best in the second half, but on-loan Wigan striker Nouha Dicko's first goal for the club sealed the points to consign Rovers to their first home defeat since November.

Rovers made a promising start and James Hayter had a great chance after 10 minutes when a poor back header fell nicely for the former Bournemouth striker, but he shot straight at Matt Gilks from 10 yards out.

Blackpool started to get into their stride and Dicko was denied by David Button after being played in by fellow loanee John Fleck.

The Tangerines were playing with a swagger and they were in front after 19 minutes when right-back Neil Eardley picked out Taylor-Fletcher with a delightful long-range pass and the former Huddersfield forward raced clear and took a touch before tucking the ball past Button.

Holloway's side were dictating the play with some slick passing and movement, but they were almost caught out when Brian Stock picked out Hayter, but the forward `s control let him down.

Blackpool were being allowed far too much time and space and it came as no surprise when they doubled their lead 33 minutes in, when Taylor-Fletcher showed some neat close control and ghosted into the penalty area far too easily before side-footing into the bottom-left corner of Button's goal.

The visitors were cruising, but Rovers were thrown a lifeline four minutes before the break when Ian Evatt upended Diouf and the Senegalese forward beat Gilks from the spot with a cheeky chip.

The home side could have been level at the break, but Hayter blazed wildly over the crossbar when the ball fell nicely for him in time added on.

Rovers boss Dean Saunders clearly delivered a few home truths at half-time as his side showed far more urgency early in the second half and it took a magnificent save from Gilks to keep out a well struck right-foot volley from the onrushing Martin Woods 10 minutes after the break.

But Blackpool carried a far bigger threat going forward and they restored their two-goal advantage with 18 minutes remaining when Button could only palm Alex Baptiste's shot from the angle into the path of French teenager Dicko, who was left with a simple right-foot finish from close range.

Dicko's goal knocked the stuffing out of Rovers and the home supporters voiced their disapproval at the final whistle.