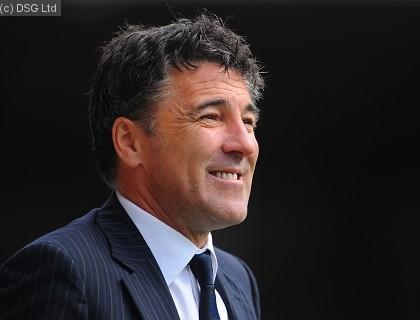 Doncaster chalked up their fourth win in a row to move joint top of npower League One with a hard-fought 1-0 victory over Oldham.

Rovers stepped up the pace after a lacklustre first half and just about deserved the points following a much-improved second-half display.

Oldham were lively at the start and James Wesolowski hit a 20-yard strike just wide of the mark in the eighth minute before Dean Furman went close following a goalmouth scramble.

Rovers put four goals past neighbours Scunthorpe on Saturday but rarely threatened in the first half apart from a header from Iain Hume which was well saved.

The Latics had a great chance to snatch the lead just before the interval but top scorer Jose Baxter hit a tame shot straight at the goalkeeper.

Baxter had cause for regret when Dave Cotterill made a breakthrough with a quickly-taken 20-yard free-kick that caught the Oldham defence napping.

The game ended controversially when Oldham keeper Dean Bouzanis and Rovers' striker Hume were sent off following a clash in injury time.