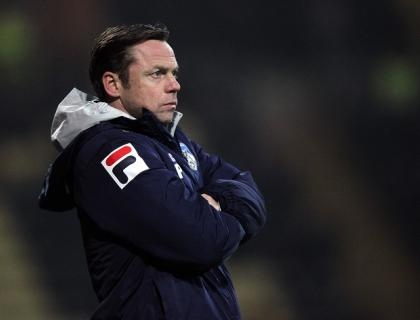 Brett Pitman chose the perfect moment to open his account for the season as his goal cured Bournemouth's travel sickness in a 1-0 win at Doncaster.


Despite winning their two Sky Bet Championship home games, the Cherries had been woeful on the road prior to this game, conceding 11 goals across two dismal defeats.


But a more robust showing in more ways that one at the Keepmoat ensured a happy ride home for Eddie Howe and his men, even if the manager had to endure an attempted roughing-up from opposite number Paul Dickov along the way.


Dickov, a feisty striker in his playing days, displayed some of his old passion on the sidelines and perhaps went too far late in the first half when he made a movement with his head towards Howe as the two debated a decision.


The Rovers boss had grown increasingly frustrated at Bournemouth's approach, accusing them of time-wasting and simulation, but the facts of the match showed that the visitors outplayed his side.


Pitman's goal was just reward for an industrious first half full of chances and, even though Bournemouth's fluency waned in the second 45 minutes, they had enough steel about them to repel the little Doncaster sent their way.


The end result was vindication of Bournemouth's approach, which appeared to be to forget their away-day ills so far and attack Rovers from the off.


Doncaster should not have been low in confidence following a run of pleasing Championship results, but, short of the lively Theo Robinson, they looked more like the side which lost to Leeds in the cup than the one which had bested Charlton, Wigan and Blackburn in a week.


Bournemouth took confidence from Doncaster's inactivity and continued to probe, with Ryan Fraser's run and shot ending up in Turnbull's arms before Pitman cracked the bar with a fine diving header from a Charlie Daniels cross.


That duo would combine to deadly effect on the half-hour, though, with the striker ghosting into the box and helping Daniels' brilliant right-wing free-kick beyond Turnbull with the deftest of headers.


Doncaster contested that James Husband had not felled Fraser for the free-kick but, regardless of that, the Cherries deserved their lead.


A hot-headed period followed, with David Cotterill and Pitman booked for rash challenges, and it was during that time that Dickov and Howe had their spat as they traded views over some industrial tackles on both sides.


The half-time interval allowed both camps to cool down but it also diluted the quality, which did not return until Richie Wellens powered an 18-yard shot over for Doncaster with just over 30 minutes left.


Bournemouth resumed control after that, cutting Rovers open on the counter, with Ward again finding himself in an advanced position and again failing to make the most of it and Turnbull keeping out Lewis Grabban.


James Coppinger then went the closest of all the Doncaster players when he snapped just wide from the side of the area, but none of his team-mates could join him in applying any pressure.