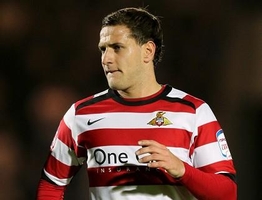 Relegation-threatened Doncaster extended their unbeaten run at home to five npower Championship matches but missed the chance for a crucial three points after dominating an off-colour Cardiff side in a 0-0 draw at the Keepmoat Stadium.

Rovers had the better of the play for the duration of the 90 minutes but despite creating a handful of chances in each half, they lacked the cutting edge to make them count.

Cardiff, meanwhile, looked far from the promotion-chasers their third-place position suggests and had just one real chance from a Doncaster error.

The game started scrappily, with neither side able to keep hold of the ball for long in the opening stages.

Cardiff's Kenny Miller did find some space to run at the Doncaster defence in the seventh minute but Tommy Spurr stood firm to retrieve possession in the area.

The hosts had started to set the pace by now and Simon Gillett was unlucky to see a first-time effort deflected out for a corner.

Cardiff were gifted a glorious chance by Brian Stock's misplaced pass in the 21st minute, but as Miller was set to pull the trigger Sam Hird made a fine saving tackle.

Hayter had two more chances before half-time, heading over from six yards and drilling wide from Billy Sharp's knock down.

The promotion-chasing Bluebirds had endured a torpid first period, though, with their attackers finding no way past the impressive Habib Beye at centre-half.

El-Hadji Diouf looked to have broken the deadlock just a minute after the interval, showing great close control to dribble into area and let fly from 12 yards.

But David Marshall got a firm hand to his shot and managed to make a smart save.

Hayter worked the goalkeeper again from 25 yards after good hold-up play from Sharp and the siege continued when Diouf's floated free-kick caused panic in the Cardiff area.

Beye got a touch across goal and the ball eventually found full-back James O'Connor, whose header went over the crossbar.

With just over half an hour left, City boss Malky Mackay swapped Joe Ralls for Stephen McPhail but despite the energy of Peter Whittingham in midfield, they continued to look listless.

Despite Doncaster's domination Sharp, who continues to be linked with Leicester, had not been on the end of one yet.

Belatedly, Rovers started to find the striker in the right areas. First O'Connor's cross just refused to settle for him and moments later he had a penalty appeal turned down.

Hayter played him in with a superb cushioned pass but although Sharp tumbled over the diving Marshall, a poor first touch meant he had already lost control of the ball.

Cardiff finally began to look livelier on the counter as the hosts pressed forward for a deserved victory in the last 10 minutes but neither side could snatch it.