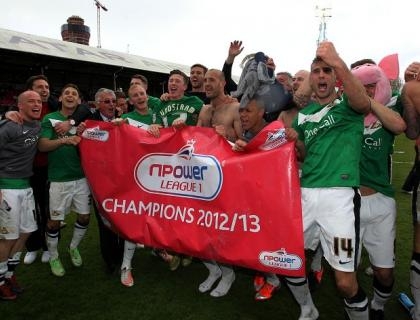 The Bees had their chance to seal promotion after Clayton Donaldson was bundled over in the box, but on-loan Fulham striker Marcello Trotta blasted his penalty against the bar. Billy Paynter then raced away on the break and squared for Coppinger to slide home at the far post.

Bournemouth, who were top at the start of the day, drew 0-0 at Tranmere but were promoted to the Championship as runners-up, while - at the other end of the table - Scunthorpe had their relegation to the fourth tier confirmed after Colchester defeated Carlisle 2-0, rendering the Iron's 3-1 win over Swindon futile.

In other games, Sheffield United drew 0-0 against Preston while Yeovil, who finished in the play-off places, were beaten 3-2 by Bury.

Andy Monkhouse scored twice in five minutes for already-relegated Hartlepool as they drew 2-2 against Crawley. Jamie Proctor gave Crawley the lead in the 70th minute but Monkhouse cancelled it out five minutes later, before he edged then Pools ahead.

Proctor had the final word as he levelled just before the death, as the travelling side were denied a win before their demotion to League Two.

Crewe beat Walsall 2-0 in their final game, with goals for Luke Murphy from the penalty spot and Chuks Aneke late in the game.

Leyton Orient finished one place outside of the play-offs after a 1-1 draw against Oldham. Jimmy Smith scored first for the O's but his 10th-minute goal was cancelled out on the stroke of half-time by Kirk Millar.

Portsmouth, meanwhile, finished their season with a 3-2 defeat by Shrewsbury, Patrick Bamford and Ryan Lowe scored as MK Dons beat Stevenage 2-0 while Notts County played out a 2-2 draw against Coventry.